02
In this short experiment we will implement simple transfer learning with Keras framework in order to get a fairly reliable classifier with just a little effort and using really little data. For this purpose we will use Resnet-152 model that was trained on ImageNet and finetune it for the task of classifying interiors of 67 different places. The data used in the experiment comes from the MIT Indoor-67 dataset.

To reproduce this experiment, you should download the data package which is available here. Unpack it in your home directory for compliance with the code.

The first step in this experiment was to get Resnet-152 model for Keras. Unfortunately, Resnet models are not officially available for Keras, but thanks to this great contribution we can have both network implementation and model weights converted directly from the official Caffe models. The code is for Keras 1.0, but you can easily get a version adapted for Keras 2.0 here, which is the one included in our code.

We will begin with checking out the model to see whether it correctly classifies objects from ImageNet dataset classes. We created a simple resnet_demo.py script that lets you run the network on chosen images from Google just by copying them to clipboard. Here are some sample results, with correct classes in bold:

Now let’s get back to our task. First, let see some of the images from the Indoor-67 dataset. As you can see below, many of the images and classes are highly characteristic and clear, but some of them are not easy to distinguish, like fastfood restaurant and restaurant, or library and bookstore, which make the classification task challenging.

Before we implement our classifier, let’s also check some reference results that were acquired on this dataset in research papers, so that we know what level of accuracy will be satisfactory. The authors of the dataset proposed their own method for classifying the images. A decade ago it was however quite a difficult task. The method achieved only 26% of mean per class accuracy. The result improved over years and the current best method reached 79% in 2016. As we will see in a moment, our simple approach will achieve accuracy of 73,2%, which is not far from the current state-of-the-art and is actually better than the top result from 2015. 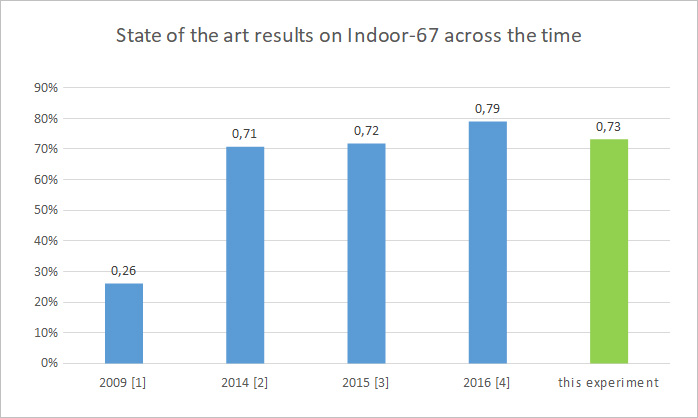 We will use the output of the last but one layer of the Resnet-152 model, which is a pooling layer with 2048 outputs, and use it as a feature vector for the classification task. This vector is directly used by the last layer to make classification in the original model (1000 Imagenet classes), so it is expected to contain a kind of summary of an input image. When treated as feature vector of an image, the vector of outputs of a given layer is also often called code or bottleneck features. Note that you can use other layers for your feature vector as well (you may have to compress them with pooling or other way, though).

In order to avoid multiple computations of the feature vector for a single image during training, we will firstly cache them by computing model outputs for each image and storing it in numpy arrays on the disk. Note that Indoor-67 dataset comes with a given train/test split, but we additionally extracted some of the train images to create a validation subset. Generated features for images in each subset are already contained in the data package provided in this tutorial, so you can also skip this step, if you have no time.

Here are some basic steps to calculate and cache Resnet-152 features:

This way we’ll compute the feature vectors for the entire dataset (contained in our data package) and store them in an array along with integer class ids, which we infer from the paths, as they include class names. Finally we can save the cached features and labels to the disk. Note that we actually do this process separately for train, val and test subsets. The entire process can take up to 2 hours when using a CPU, but it will be a matter of minutes if you use a GPU.

After caching feature vectors for the dataset we can move on to training our classifier.

Training time should take just around a minute and your outputs should look like this:

Now when training is completed, it’s time to test our classifier.

And now we see our test result:

And finally it is the best part – let’s see for ourselves how the classifier performs on the test data. We will run a demo to perform full classification (which includes feature extraction) to see how it works on particular images.

And here are some randomly picked results:

In this short experiment with indoor places classification we eventually achieved a pretty nice result of 73% accuracy, which is in fact a little bit better than the methods from previous years, and only 6% lower than the current state-of-the-art. The presented approach method is fairly general and can be used in many other problems other than indoor photos classification. Notably, the overall training time of the classifier takes only 2 hours even without using a GPU, while the classification layer trains just in a minute.

There are still several things that can be done better, though. First of all, you can consider slight retraining of the entire network with lower learning rate, instead of freezing all of the layers up to the final pooling layer. This will obviously take longer to train. You can also try earlier layers for feature vectors and compress them to handle their large dimension. Furthermore, you could run hyperparam search to find better training parameters, especially regarding learning rate and its decay policy or the batch size. In this tutorial the train params where simply adjusted experimentally, but in general you would prefer to run an automated random search to check larger amount of parameter sets. Finally, you can also pay more attention to the data itself and apply more or less fancy data augmentation techniques.